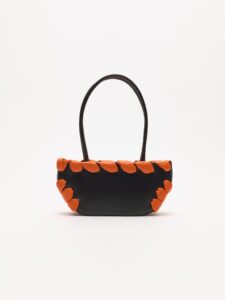 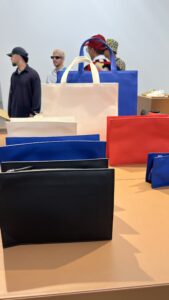 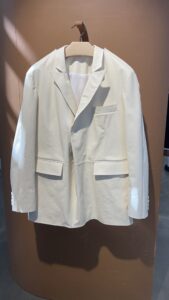 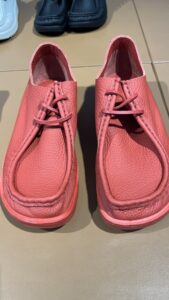 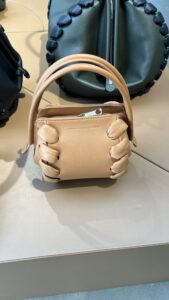 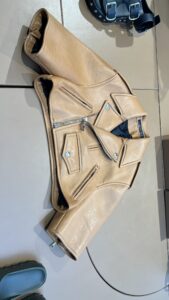 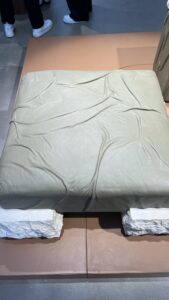 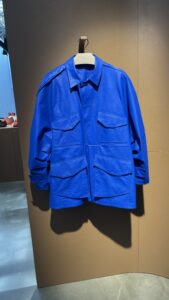 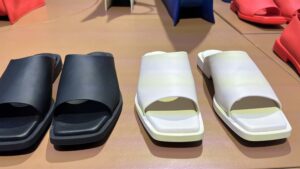 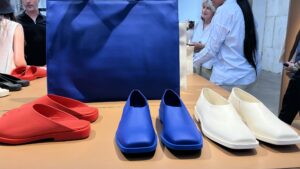 Unlike typical collectives, each designer was encouraged to bring their point of view to the project.

“The goal was to bring together four creators and have them do whatever they wanted to achieve something interesting and new,” explains Murkudis. 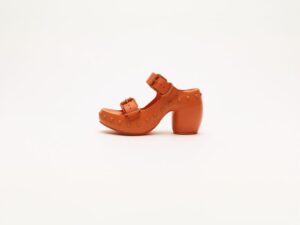 The latter pitched the idea for the collective to Ecco Group CEO Panos Mytaros in 2020. “The designers express their own opinions, so there is not a creative direction for the whole collection,” adds Mytaros. “We are the gallery; they are the artists.”

For Ramsay-Levi, who served as the Creative Director of Chloé from 2017 to 2020, the prospect of designing a tightly curated collection outside the expectations of the typical fashion cycle was enticing.

“There was no project brief; it was about creating whatever we felt like,” she explains. “I loved the idea of going from my past, which was about working on whole collections, to suddenly having to focus on standalone products.” 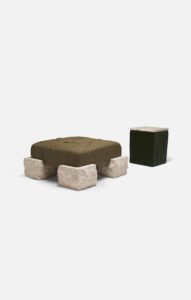 Each of Ramsay-Levi’s pieces experiments with the interplay of two opposing elements. Some shoes combine the straps and shapes of typical sandals with the studs and chunky heels you’d find on wooden clogs; structured, leather-wrapped cuffs showcasing roughly cut geodes; a dress constructed from a vintage t-shirt outfitted with a leather vest and skirt; and a selection of minimalist shoulder bags decorated with oversized whipstitches.

With his eponymous Barcelona-based line of leather goods, Reina, who previously worked with Hermès and Balenciaga, was especially well-positioned to join the collective. Inspired by his interest in architecture, which he briefly studied before pursuing fashion, Reina approached his capsule with structure and shape in mind. 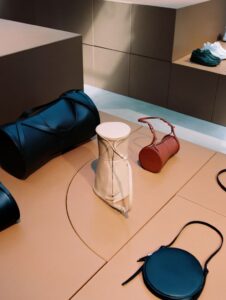 “I’m always playing with functionality, but I’m also very interested in geometry,” says the designer, citing classical architects of the 20th century like Alvar Aalto, Ludwig Mies van der Rohe, and Charlotte Perriand as integral influences. So along with Velcro-clad footwear styles and a bag silhouette reminiscent of a free-standing drum, Reina created two side tables and a lamp—all three of which mimic the bag’s pinched cylindrical shape—as part of his capsule. “We chose to use tanned vegetable leather because it’s much more sustainable,” he notes.

“Most of my work is about gestures and movement and preserving natural creases,” says the designer, who helms her label. “So I made a chair with leather that creases in the middle—I wanted it to be very interactive, in a way.”

The most interactive part of Saunders’s collection, however, is a selection of versatile, polished bags and clutches. Each suitcase is outfitted with a wire frame that’s meant to mould to the shape of its wearer. “It’s a doctor’s bag, but it has this idea of touch connected to it,” says Saunders. Lightweight slip-on shoes and oversized collared pullovers with snap closures round out her vision. 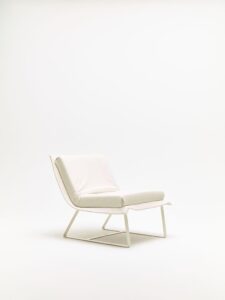 For his contribution, Murkudis, who now helms his eponymous brand but cut his teeth assisting Helmut Lang as a young designer, began with the idea of creating a highly technical yet visually sparse bag. “I wanted to do something futuristic, functional, and almost two-dimensional using a natural material,” he says. The result, a minimalist tote, riffs on classic paper grocery bags by featuring their standard fold lines moulded into its leather. In light of the complex leather-working that goes into it, Murkudis calls the style “a little art piece that appears as a functional bag.”

This moulding technique appears throughout Murkudis’s capsule, on clutches with shiny gold plating, cropped motorcycle jackets, and long belted coats. To ground it all, Murkudis also designed a round-toe sneaker featuring bold cutouts—his way of updating a tried-and-true classic. “That was the overall idea,” he concludes. “To make something different than anything else that’s already been proposed.”

To stay updated on everything happening in the Fashion NFT world drops, check out the best sneakers to add to your rotation this week, follow @stylecartel on Instagram, and sign up for our newsletter for early access to the best drops sent straight to your inbox.