Five months after Off-White founder Virgil Abloh‘s untimely death, the brand has announced it has appointed stylist Ibrahim Kamara as art and image director. Kamara will join what has been described as a collective of creatives overseeing the artistic direction of the brand.

According to the press, Abloh and Ibrahim’s relationship began three years ago through DMs exchanged on Instagram. Subsequently, Ibrahim has provided design and styling input for Off-White as well as Louis Vuitton menswear. In his new role, Kamara will further develop his influence and insight on the brand’s collections, image and content.

“Virgil will forever be with us. With me. He changed the world and left an indelible mark on anyone who encountered him and beyond,” Kamara wrote on Instagram. “Generous with his time, mind and creativity – he saw everyone and created with all humans in mind. I am honored to further link my ties to Off-White™️ as their Art & Image Director and be a part of the team that will tell the rest of the story Virgil started writing for us all.” 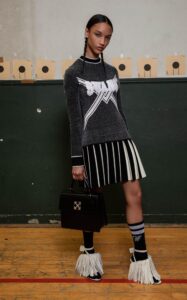 Weighing in on the appointment, Off-White CEO Andrea Grilli stated, “In the wake of Virgil’s tragic passing we have been working tirelessly to keep his legacy alive and the brand relevant as a point of reference and platform in constant evolution. Inspired by Virgil’s vision and approach to his art we have nourished a collective of creative minds that represent the best in their category and have a strong and personal connection with Virgil. Having Ibrahim on board, who has been part of the Off-White family for years styling our shows, to oversee art and creative of the brand in this next chapter is a great honor. With his talent and vision we look forward to taking on the next chapter of Off-White together, always remembering the groundbreaking creativity and values that Virgil had at heart and that are the core of our brand”

Born in Sierra Leone in 1990, Kamara and his parents fled the country after civil war broke out in 1991. Following a period of living in Gambia, the family moved to London when Kamara was sixteen years old. Kamara took an art and design course at Westminster Kingsway College and subsequently studied fashion communication at Central Saint Martins.

Kamara began working as a senior editor-at-large for i-D magazine in 2019 onwards. He has also worked for British Vogue, Vogue Italia, System and W and was appointed editor-in-chief of Dazed in January 2021. As a campaign and runway stylist, Kamara’s list of clients includes Burberry, Erdem, Stella McCartney, Dior, Comme des Garçons and Fenty. For his work as a stylist, he was awarded the Isabella Blow Award by the British Fashion Council in November 2021.

To stay updated on everything happening in the sneaker world drops , check out the best collaborations to add to your rotation this week, follow @stylecartel on Instagram, and sign up to our newsletter for early access to the best drops sent straight to your inbox.