The three things I love about the FENDI Baguette Bag are, One, I have one, two, it’s like French bread and Three, all the Sex and The City memories. FENDI Baguette Bag 25th Anniversary Collection during New York Fashion Week was star-studded. But, first, scroll for some history and pictures from the who’s in attendance.

“Give me your bag!” a robber yells to a startled Carrie Bradshaw in season three, episode 17 of Sex and the City. “It’s a Baguette!” Bradshaw cries out, and with that, millions of viewers understood in a flash what their heroine was saying: This wasn’t a mere purse—it was something far more important, far more beloved. 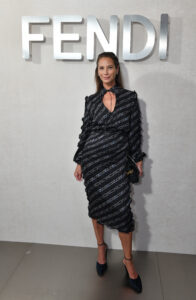 In the words of Silvia Fendi, the Baguette’s redoubtable creator, that truncated, short-handled, often highly embellished envelope has “its own personality and its own identity—it’s a little sexy bag!” Fendi dreamed up this icon a quarter of a century ago, and now the house is pulling out all the stops with a series of tributes that began during New York Fashion Week—because if the Baguette first saw the light of day in Rome, it came of age and had its early triumphs in Manhattan.

Kim Jones, Fendi’s artistic director of womenswear, not only decided to show a special collection in New York—to make things even more exciting, he invited his friend Marc Jacobs, who he refers to reverently as the King of American Fashion, to present a small collection honoring both the Baguette and Fendi itself on that same runway. “Marc is one of my heroes, the reason I am here,” Jones says, and indeed, years ago Jacobs hired Jones to do the menswear at Louis Vuitton.

Fendi is also issuing special Baguettes for the occasion, and the eminent Tiffany & Co. is also getting into the act, offering some stellar interpretations—a sterling edition! A gem-studded version! Even the spiritual godmother of the bag, Sarah Jessica Parker herself, is contributing a Baguette she has helped design.

Jones describes the Baguette as “one of the pillars of the house. It became very famous—it was the It bag and the symbol of New York. I’ve always loved the vibe and energy of the city, the beauty in the way it regenerates itself,” he explains. The 1990s were a special time for Jones and his nascent Manhattan adventures. He was still underage—he had a fake ID to get into clubs like the Pyramid in the East Village—and was fascinated by “the excitement of New York” and the mix of uptown and downtown. “You would see a gallerist next to a skateboarder,” he says. “I still have every flyer from those days!” For his homage to New York, Jones has created a collection that, he confesses, is quite different from those he shows in Italy. There is a streetwise wisdom to these New York clothes—sleeveless tees and black-sequined windbreakers—and you cannot help but notice more than a smattering of that particular shade somewhere between sky and aqua, known universally as Tiffany Blue, showing up in everything from a gauzy asymmetrical skirt to a sleek jumpsuit. Jones smiles. “Well, the Tiffany flagship in New York is near the Fendi flagship. They are blue, and Fendi is yellow, so there’s a synergy.”

Believe it or not, Jacobs wasn’t at all sure he wanted to be a part of this lollapalooza when Jones approached him—as it turns out, he’s actually much more comfortable when asking someone to work on a project with him, not the other way around. “At first I wondered, Can I work outside my comfort zone?” Jacobs says. “I tried to think about what Fendi meant to me—I thought back to Karl and the late ’70s, and then I thought about, What is Fendi today? I took a look at what Kim is doing, and the Baguettes, put it all together, and finally I decided to stop over analyzing it and just have fun with it and see what I could bring to Fendi.”

To stay updated on everything happening in the Fashion and streetwear world drops , check out the best collaborations to add to your rotation this week, follow @stylecartel on Instagram, and sign up to our newsletter for early access to the best drops sent straight to your inbox

Candles That Capture The Summer Feeling For Longer