It is Sneaker Freak Friday and the perfect time to chop it up about Balenciaga’s Trashed Sneaker Culture  Controversy. Shredded, stained and graffitied, the £1,290 ‘Paris’ sneakers are just the latest example of style’s flirtation with destruction.  In to trends or not this sneaker will sell not only because of the cult following of Balenciaga.

The fashion house Balenciaga dropped a new pair of sneakers and I am sure we will see it replace the black sock sneaker.  Because sneakers are big business at Balenciaga, from the hood to Hollywood everyone has a pair of  Balenciaga’s in their sneaker rotation.   Sneaker culture is a sizeable chunk of a brand’s turnover now estimated at $2.3bn. But this new style — dubbed the “Paris” . 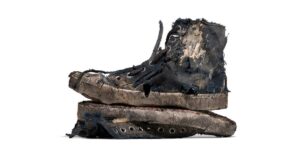 The internet has gown crazy since the release because of  the price of the sneakers (which ranges from £350 to £1,290), nor scarcity (a relatively wide choice is available), but rather by a limited-edition version that has been customised to look annihilated, shredded, stained and graffitied by the artist Léopold Duchemin, and featured in imagery to promote the shoes.

He used a multitude of knives, scissors, punch paper for the texture,” said a Balenciaga representative. “For the colour, he used tea, wood filler, shoe polish and floor polish.” The result are dubbed “Full Destroyed”, and while the other “Paris” sneakers in the range are gently scuffed, 100 limited edition pairs have been heavily distressed. So what’s the big deal?  Punk is here to stay and this drop has sneaker culture going crazy.  We are waiting for the resale price. Nothing new here. Fashion has flirted with destruction for decades — arguably, even centuries — with the most obvious example being punk. An early version is slashing, the rich decoration of court costumes in the 15th and 16th century inspired in part by battle-slashed clothes.

And in a similar vein high fashion has often, controversially, mimicked the clothing of the less fortunate. Marie Antoinette famously dressed as a milkmaid in gauzy white muslin in the twilight of the Ancien Regime, inciting anger from the impoverished population of France. In the 20th century, Gabrielle Chanel’s simple jersey dresses — the material drawn from the uniform of fishermen — were derided as “poverty de luxe” by rival Paul Poiret. But Chanel’s elevation of simplicity is a bit different from distressing clothes to appear worn.

Our Question is Cop or Not?

To stay updated on everything happening in the sneaker and streetwear world drops , check out the best collaborations to add to your rotation this week, follow @stylecartel on Instagram, and sign up to our newsletter for early access to the best drops sent straight to your inbox.

The Best Luxury Yachts for Charter in Greece

Why Everyone’s Buying the Yeezy 700