Balenciaga Catwalk Show On Wall Street in New York! Guests who secretly, or not so secretly, griped about the timing of Balenciaga’s off-schedule Spring 2023 show on Sunday in New York quickly forgot their complaints.   Upon entering one of New York’s most hallowed halls: The New York Stock Exchange. Demna sent a troupe of models in leather gimp masks down the runway, along with a new Adidas collaboration.

The Kering-owned French brand embarked on the unusual timing for a company first, under Demna’s direction, to hold a show in the Big Apple.  New York’s make-money, money culture needed a fashion bang to raise the economy.  With a stack of fake Benjamin’s arriving in a crumpled paper bag that served as the invitation which disclosed the Wall Street address.  Demna is now the Fashion Wolf of Wall Street spreading the city with $$$ Bills ya’ll.

FTSE, but make it fashion! Demna, who, lest we forget, goes simply by a mononym now, took over the New York Stock Exchange for the  SS23 Balenciaga show. Not since Carrie Bradshaw was invited to ring the bell and open the market in a 2003 episode of Sex and the City has the Wall Street space been at the epicentre of a such a raucous pop culture moment, but that Balenciaga would choose the home of rampant capitalism as a venue makes perfect sense, given the designer has spent the best part of the last decade exploring and subverting this very idealology.

Teaser images on Balenciaga.com suggested a nostalgia for the ”city that never sleeps.”

This is to say that Demna’s vision of New York might be dated. Right now, the most significant similarities to that era are the crime, subway woes, and rat population. Unlike the eighties, Trump is no longer welcome here, cocaine has fallen out of favor with edibles, and despite the Fed’s recent interest rate hike, rates are nowhere near 1981’s highest rates ever of 16.63 percent 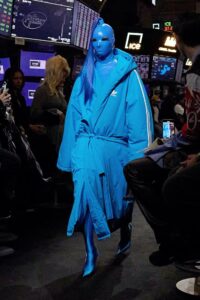 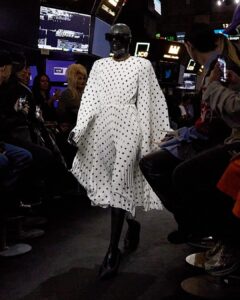 These tailored looks are part of the ‘Garde-Robe’ line of what is presumably RTW wardrobe staples. He finished the looks with cartoonish-sized men’s derbies on “steroids,” according to a release and blown-up pumps for the ladies. Stripped away from these accessories, there was great merch to appeal across the generations, aka big kids’ clothes. 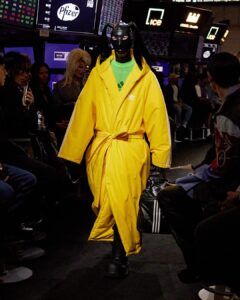 But Balenciaga was not here for all work and no play, and perhaps signaling the massive after-party, about halfway through, a hard-to-resist electronic trance soundtrack started prompting guests to bob in their seats. The screen displays began jumbled, making those stock prices and talking news heads go haywire. The vibe matched the Adidas X Balenciaga collaboration unveiled to make cool-club kids, and hype-beasts grap their coins with excitement. Continuing in the oversized vein, Demna puts his mark on classic tracksuits, hoodies, tanks and t-shirts, shorts, duffle bags, wrestling-robe style stadium coats, and sneakers. Several styles showed tinkering of logos, with Balenciaga appearing backward. 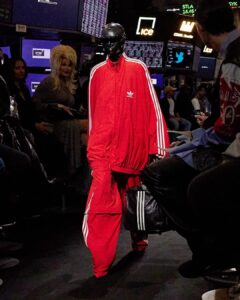 The special release went on sale immediately on Balenciaga.com at 12:30 p.m EST and will be on offer for exactly one week. The price tags line up with 80s excess; prices start at $210 for a pair of socks and end at a puffer for $5,500. T-shirts are on average $795 and sneakers $995. The clothes don’t have to be that expensive, but they are because they can be. Case in point, the “full destroyed” look hi-tops, which looked as if said New York rats gnawed them into oblivion, went on sale for $1,850 recently. Maybe taking the greed associated with the eighties literally?

As the crescendo of the finale came, the screens looked ready to burst before switching off and displaying a blank white screen. The moment in this financially significant spot was eerie as if to remind us that when we push boundaries, sometimes they burst.

To stay updated on everything happening in the sneaker and streetwear world drops , check out the best collaborations to add to your rotation this week, follow @stylecartel on Instagram, and sign up to our newsletter for early access to the best drops sent straight to your inbox.

Time To Start No Tights Season With Those Top Bodycare Products